Henley Lions fund Moments to Remember at the Chilterns Centre

This morning Henley Lions Club presented a cheque for £1,000 to The Chilterns Centre to fund their “Moments to Remember” programme. This is the fourth consecutive year that Henley Lions have funded this project. The scheme, originally called A Day to Remember, was the idea of Lion Ian Forster who proposed that we could bring the British seaside to the Chilterns Centre for the patients and their families to enjoy. That was a huge success and was enjoyed by everyone who took part. This has since been transformed by Pamela Lee of the centre into Moments to Remember which take place throughout the year and which are equally enjoyed by patients, families and staff. Accepting the cheque on behalf of the centre was Paul Barrett, Chairman of Trustees.  In the photo below are, from left to right, Gareth (Deputy Manager), Lion Ian Tritton, Eddie, Anna, Paul Barratt, Danii, Waqas, Lorraine and Lion Ian Forster. Henley Lions are very proud of our excellent relationship and continued support of the Chilterns Centre. 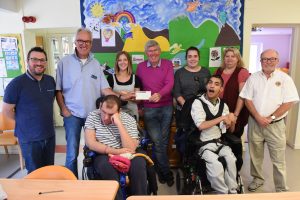