Santa has come to Henley on his sleigh once again this year continuing a tradition that goes back well over four decades.  For many years Santa’s Sleigh was organised by Henley Round Table but, sadly, their club folded earlier this year. When it looked like Santa would no longer bring his sleigh to Henley, Pam Phillips, a former mayor of Henley, stepped in to save the day.  Pam, now the newest member of Henley Lions Club, has organised 10 nights for Santa and his sleigh to tour the streets of Henley. His first night out was to have been on Sunday, 10 December, but conditions underfoot were too dangerous for his helpers and so the start was delayed until Monday, 11 December. Santa had a great night out and along with 11 collectors traveled along Hamilton, Vicarage, St Andrews, St Marks and the Gainsborough Estate. His travels will take him to Shiplake and then back to Henley over the next two weeks. Collections are going to support the Bishopswood School Christmas Party along with other local charities supported by Henley Lions. 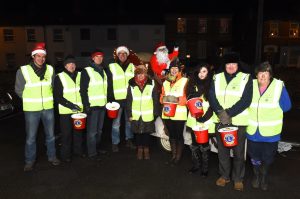